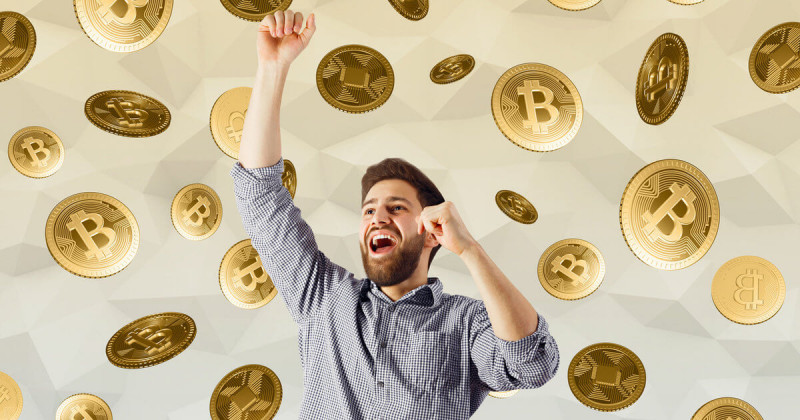 Bitcoin millionaires seem to be popping up all over the internet, wherever you click. The more often this happens, the more people get interested in Bitcoin and other “cryptocurrencies”.

Talk about a leap! It’s easy to feel like you’re missing out, wondering if you should have bought some when this digital currency came onto the scene in 2009, and be kicking back in Bora Bora sipping bubbles as we speak.

But is it really investing?

Have a look at another year in the life of Bitcoin.

That wasn’t that long ago. After a drop in value like that – imagine if your house had gone from being worth $1.2 million down to $379,000 – who would have predicted the recent skyrocketing of Bitcoin?

And what about all the other crypto-money out there? From 0x and Abjcoin to Zcash and Zurcoin, at this writing there are 1,279 cryptocurrencies and counting. Bitcoin is the oldest and biggest in volume, followed by Ethereum, Tether, Litecoin, Dash and Ripple.

Instead of the IPOs (initial public offerings) of the world of shares, now there are ICOs (initial coin offerings). These are typically unregulated campaigns to launch new cryptocurrencies, but instead of an equity share of a company, these offer the coins themselves.

Care to predict which will be the next Bitcoin? It’s anybody’s gamble, really.

The difference between investment and speculation is important, but it’s not always easy to discern. The simplest way I can put it is using the example of buying land:

Hold on, you might say, investments can generate wealth both from the income they generate and from capital growth (becoming worth more). True.

But investments must produce regular income for you beyond a simple shift in market price – which is the key difference between true investing and mere speculation. It’s one of the reason the traditional kinds of investments of shares, property, bonds and cash get often mentioned here. These investments are always financially valued by their income.

If you’re just taking a guess on whether that market price of a cryptocurrency will soar, that’s more like gambling. Now I’ve got nothing against gambling in itself (unless you can’t stop). But if it’s a game, it should at least be entertaining, right?

“The line separating investment and speculation, which is never bright and clear,” says Warren Buffett, “becomes blurred still further when most market participants have recently enjoyed triumphs.” Which is of course what we are seeing with Bitcoin millionaires. “Nothing sedates rationality like large doses of effortless money.” Then he adds, somewhat ominously: “But a pin lies in wait for every bubble.”

Will your digital wallet get picked?

The world of cryptocurrencies – and the services wrapped around them – come with a slew of new risks for you and me. The Financial Markets Authority has just put out some new material to help investors (and speculators, I’m sure) to stay safe.

Here are key things to know about cryptocurrencies:

You’ll find more on cryptocurrencies, and the risks that come with them, on the FMA site.

Tricks of the scamming trade

Awesome article, it was exceptionally helpful! Thanks for sharing valuable information.

Love to see this page updated to reflect last couple of years history. It's pretty interesting

The rationale for this commentary is clear and draws two distinctions. First, it forewarns vulnerable investors who work hard for their money to be wary about this popular "cryptocurrency". Second, it is an iceberg on cryptocurrency volatility and high risk associated with this type of investment or speculation. The decision is yours. In my view, if you have adequate money that can equally be left by the roadside and not border whether you meet it the following day growing branches or become invisible, then go for it, otherwise don't.

Cryptocurrency will become valuable investment opportunities when it gets stricter regulations at the country level.

In view of the recent outbreak of COVID19 and the recent fall in stock. It is best to start looking at ways to diversify and seek alternative ways of earning income while social distancing/self isolating.

All that is new is not bad - it's just new. Investing in the new world is all about learning about these things, without always buying into it. True, it's easy to lose your cryptocurrency (no keys, no coins), but for the spirited DIY investor who understands the basics, there are rewards for getting involved. The price of Bitcoin is very one-dimensional and there's far more to investing than holding a crypto-asset and hoping for a gain in value. In the new world Bitcoin could potentially be a common store of value, and unit of exchange (we're not there yet but good things take time!) and a viable, non-government underwritten currency.

My experience says you should encourage your subscribers who are ok with high risk investment to get involved with Bitcoin and some main tokens. Fiat currency is dying in my opinion and crypto is the future