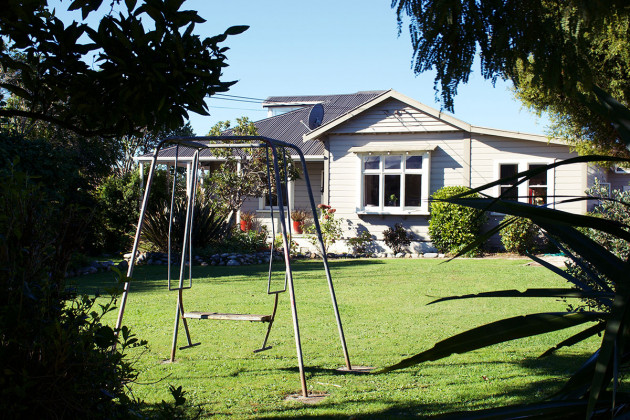 To solve a formidable problem like housing, often the best solution is to collaborate, to partner up. With the Auckland property ladder seeming more and more out of reach, here’s a story of not just one, but two couples joining forces to solve it.

Back in 2014, Rosa and Jesse, along with Jesse’s sister and her partner, had shared a house they rented for five years in Mount Eden. Theirs was a villa that had been converted into two flats, with each couple having their own flat, living side by side.

Rosa and Jesse were looking to buy, but could not find anything at first. So the two couples rented a whole house together for 18 months.

“Jesse and I were looking at places that we thought would be within our budget,” she says. “They knew we were looking. But we were not finding anything that we liked.”

That’s when the idea came up to buy together.

“The Auckland market is what it is,” says Jesse. “The best time to get in is today. You want to get in as soon as possible. Collaborating with others is really a great strategy if you can pull it off.”

“At the time, it was the only way we could get into the housing market,” explains Rosa.

“We had lived together, flatted together, the four of us. That was why we thought we could make it work.”

“I’ve got a pretty good relationship with my sister,” Jesse says. “I think the key to it is communicating clearly, openly, with respect.” His sister’s partner is easy going, and they had known him for a decade. These were not new relationships, and the couples had fairly similar financial situations, so they were evenly balanced.

How two couples used KiwiSaver to buy a property together

“We each had access to our own KiwiSaver funds and we all qualified for withdrawing them for our first home. It was an easy thing to do. We relied on it quite a bit,” Rosa says.

One challenge was just finding a place that was suitable for everyone. “We had to agree on location; that was the main thing. It had to have three bedrooms, two living areas, a decent-sized kitchen. There were things that we were looking for that we had to have to make it work.”

With two couples (and eventually families) living under one roof, it had to have two living spaces to give each enough privacy when needed, with room for two refrigerators to give each family some autonomy.

In the end, they settled on a house in Avondale that would be their home for five years.

Put it in the contract

They decided to consult a lawyer and draw up a contract together. “We were very close, but we still felt like we needed a contract,” says Rosa.

“But I don’t think we ever signed it,” adds Jesse.

The process of creating one helped them think about an exit strategy for them, for example if one of the couples broke up. In the event of a split, or if someone fell ill or passed, there would be a market evaluation by registered valuer, and the other couple would have first opportunity to buy out the other. If not, the house would be sold.

To divide the equity in their home, they would keep track of how much was put in by each couple. Proceeds would be split, depending on how much each had paid toward the loan.

Using the built-up equity to upsize on their own

By the time 2020 arrived, the arrangement had worked for five years. They had converted their three bedroom into four, and what had started as four people sharing a house had turned to seven, with the arrival of three children.

Things had become too small, and it was time to go their separate ways. With children, “you’re basically co-parenting,” says Rosa.

They also found the selling process, particularly during Covid with small children, stressful.

Looking back, they would recommend buying together with family. Decisions made together, such as for renovations, were pretty seamless. And happily, them buying together set up both couples to upsize to their own places.

“It’s enabled us to buy a house in Mount Albert,” Rosa says. “We wouldn’t have been able to do that if we hadn’t had bought with them. It enabled us to increase our deposit. They went on to buy another house too.

“People are impressed that siblings could live together. It all went really well.”

Investing your dollar to vote for the future you want