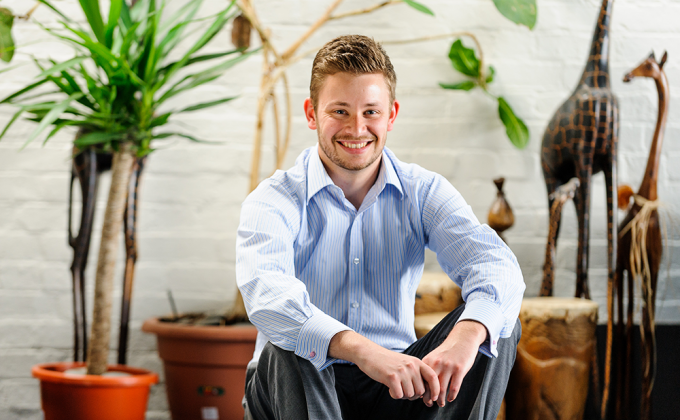 For Michael Price, the 2011 Canterbury earthquake brought his masters in computer security and forensics to a shuddering halt, giving him a different perspective on his finances.

Many university staff left Christchurch after their homes were red-stickered, and Michael’s course was cancelled. It was a devastating experience.

‘I was gutted. The staff weren’t there to teach and the facilities weren’t available to be taught in. I couldn’t continue studying what I was passionate about.’

So on top of the $32,000 he had previously borrowed to pay for his undergraduate degree, Michael was left with an extra $13,000 debt for a course he was unable to complete.

‘I felt a bit cheated, but I had to make the best of the options I had left,’ he says.

For the first few weeks after the quake, Michael worked as a volunteer with Civil Defence, managing to scrape together a few weeks’ work. Unable to find a job, he returned to his hometown, Nelson. Eventually his luck changed.

‘Things finally started to look up in October when I got a position as a test analyst at the Department of Internal Affairs, earning around $50,000 a year,’ he says.

Managing wages from the get-go

Getting the job incurred its own expenses: he had to borrow $2,500 from his parents for relocation costs to Wellington – a debt he wanted to pay off as fast as possible.

‘As soon as I could, I set up an automatic payment of $100 a week. I wanted to show my appreciation and repaid my debt within six months,’ he says.

He split his $800-a-week net income into three separate accounts. ‘My salary goes into an online account that I can’t access via ATMs and which pays me 3.15% interest. The fact that it’s online makes me stop and think before using the account and having a splurge,’ he says.

Spending is separated into two accounts. Michael uses his ‘serious card’, a Visa debit card, to pay for expenses like rent, utilities and food, while an Eftpos card covers socialising and grooming costs.

‘Physically separating these two accounts makes it easy to see how I have spent money on my needs versus my wants when I look at my monthly bank statements. If I am spending too much on my Eftpos, I make adjustments to ensure I always have enough to pay for my basic living expenses,’ he explains.

In the short term, Michael has been paying off his $2,000 overdraft as well as paying back the  loan to his parents. And over the next three years his goal is to eliminate at least a third of his $45,000 student loan.

In five years’ time, he’d like to buy an investment property or shares in a company to help him live comfortably during his retirement.

For now, Michael has opted out of KiwiSaver to concentrate on paying off his short-term debt. As soon as that’s done, he plans to sign up to KiwiSaver or a similar retirement saving scheme.

‘I may be setting high goals, but I figure if you don’t set them you are not chasing anything and can become lethargic. The job has been a real motivation to save and made me more realistic about what I can and can’t do with my money, how much it costs me to live and how much it’s going to cost me to live in the future.’

‘I have planned it so that I am living comfortably but paying my debt off as well,’ he says. ‘Uni taught me to budget with a small amount of money. When I started my new job I was able to stick to a good budget.’

Michael doesn’t own a car and he limits takeaways to two nights a week – both are decisions to keep costs down. He’s also avoided the temptation of getting a credit card.

‘Food is where I’ve made the biggest changes: now I limit the number of coffees I buy and pack my lunch. Ironically I spent far more on alcohol at uni than I do now when I have more money,’ he says.

The 2011 Christchurch earthquake had a huge impact on Michael’s life. And while he has debts for a course he couldn’t complete, Michael has started afresh.

Very positive attitude and approach to the issues

Agreed with previous comment, should of utilized his employer paying 3% for his Kiwisaver. But overall, his attitude towards his debt is positive and productive.