How much money can a Big Mac make? 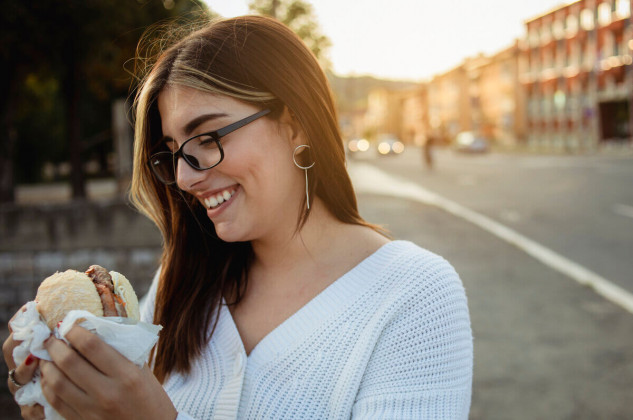 When you’re craving one, eating a Big Mac has short-term benefits. Really short term, like feeling full and satisfied in the moment. But what would happen if we invested that money to get some long-term gains?

The price of Macca’s most famous double burger – the one with two patties, special sauce and the extra bun slice in the middle – gets tracked a lot. While it was just US$0.75 in 1967, when it came out, these days it can be found on Uber Eats for all of NZ$8.30.

What if you invested as a one-off?

Okay, so say you took that $8.30 and invested it in shares over 45 years. And just left it there.

That’s a big return on the price of just one Big Mac! It’s thanks to the power of compounding interest – you earn interest on your money, then that interest earns interest, which earns even more interest, and so on.

What if you invested little and often?

Let’s say you invested the price of a Big Mac every week instead. That’s almost $432 a year.

The difference that investing early makes

Up to now we’ve been talking about investing over 45 years, but it’s also intriguing to look at what happens over 20 years. Not just any 20, mind you, but rather how investing over the first 20 years of your working life compares to investing over just the last 20 before age 65.

Investing as soon as you start working

Investing when you’re closer to retirement

But if instead you put off investing your Big Mac money until the last 20 years before age 65 – which many of us do as we enter our highest earning years – the results are less impressive.

Point being: the earlier we start our investing – even if it’s just the price of a Big Mac – the better off we’ll be in the long term. That’s the power of compounding over time – the longer your money is invested, the better returns you should earn.

Riding the market by investing regularly

Investing is about riding the market’s waves of growth by regularly drip feeding into it (much like we do with KiwiSaver over our working lives).

We typically estimate our future results using an average, much like with the 5.5% return above. But the future will be much more varied, with many more ups and downs. In aggressive funds, for example, our results could range from as high as 22.5% to as low as ‑12.9%. 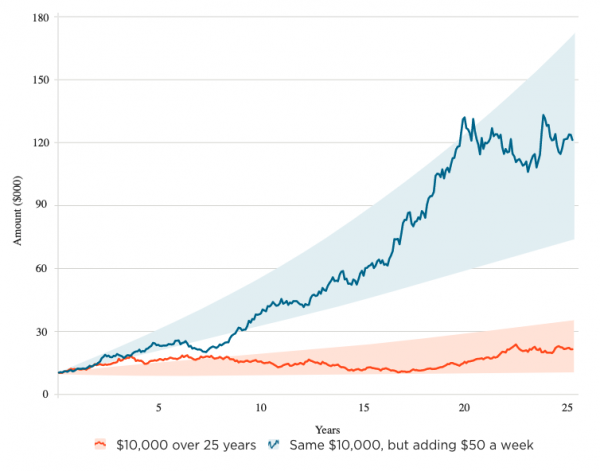 Have a look at these two lines, which are simulations for aggressive funds over 25 years. The lower orange one is if you started with $10,000 and left it invested on its own. The blue one is if you put in that $10,000 and added $50 to it every week.

By investing regularly, you’re able to take advantage of the possibility of those larger jumps in value when they happen. As they say, you’ve got to be in it…

Buying shares all the time, instead of guessing the right time

The other advantage of regularly drip-feeding money into your investments over the years is that you buy gradually, steadily. In many ways this is safer investing. If you dumped all your money in just before a steep fall – like one caused by the pandemic – this could be dangerous.

The big losses could be difficult to stomach, and you might give up on the whole thing before the markets recover. (Happily, they did bounce back quite quickly after COVID-19 hit. Sadly, most who had fled the market missed out.)

Investing a bit at a time sees your money growing, potentially a bit more or a bit less, but over time heading in the right direction.

Investing little and often is a brilliant system

As you drip feed your money in and buy investments like shares, their price could be low or high at that given time.

When shares are more expensive, for example, you end up buying fewer of them – and when they’re cheaper you buy more. Just what you want, right? Buy less when prices are high, buy more when things are on sale. Genius.

All of this is making me a bit hungry though. As I couldn’t get to a Macca’s in lockdown, it was easier to make something at home and get investing instead.