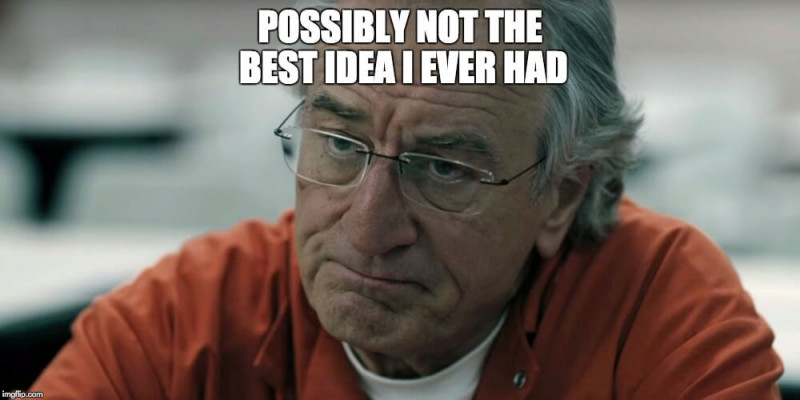 There’s a key moment in Robert De Niro’s new portrayal of Ponzi schemer Bernie Madoff, in The Wizard of Lies. Pronounced “made off”, he infamously “made off” with billions in an estimated $64.8 billion scheme that collapsed in 2008, the largest fraud on record.

The film features dizzying amounts of money, and De Niro’s character has just persuaded a single investor to put in $400 million. To do that, the Ponzi operator plays “hard to get”, making his scheme seem like an exclusive club where you pay to play. The investor falls for the ruse and shakes on the deal.

But the money never turns up. “What happened to that guy?” De Niro later asks his partner in crime (played sleazily by Hank Azaria). The promised $400 million is money he desperately needs, as many other of his investors happen to be running for the door and pulling their money out.

Since a Ponzi scheme relies on new money coming in to pay existing investors (instead of real investment returns), the house of cards will collapse if it doesn’t.

“That guy, he asked too many questions,” complains Azaria’s character. Questions like where the money was invested, where the money was held, what kind of investments were being made. The preliminary questions anyone should ask as they start their “due diligence”, whether they’re investing $400 million or just $400.

And just like that, Madoff has to give up on that investor ever putting money in. It doesn’t take many probing questions from an investor before he and his underlings must move on and look for some other target.

Now I wish I could say that Ponzi schemes are an “only in America” phenomenon like the Madoff case. Although the numbers are far more modest, scarily similar things have happened here in New Zealand.

The country’s biggest Ponzi scheme operator has been David Ross, who defrauded close to 700 investors. An estimated $115.5 million was lost. Shane Scott deceived investors with a $5.4 million scheme. Paul Hibbs’ Ponzi was $17.5 million.

The toll on individual investors and their lifestyles can be shattering, especially retirees with little opportunity to recover. One couple, for example, may have tragically lost as much as $650,000 when they invested at the suggestion of an “ultra-diligent friend” – who also purportedly lost everything.

I also wish I could say that avoiding the fraudsters’ nets will always be so simple – that asking just a few questions will keep our money safe. It often takes fraud investigators years to unravel where the money has wound up.

But asking challenging questions is a good place to start to protect ourselves. There’s simply no point building up a lifetime of savings only to lose it when you need it most: the years after you ease up from paid work.