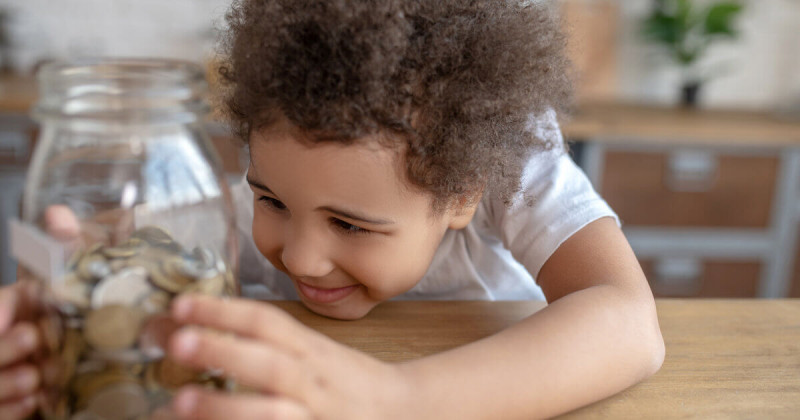 With it being Global Money Week, it’s the perfect time to talk about how money works with the kids and put some good habits in place.

A while back I came across a book on teaching your child about money that had an entire section about the many flaws of piggy banks. (My wife quickly pointed out how odd it was that the book had one on its cover.)

Here are some of the reasons why they are so bad, apparently:

There is so much we need to teach our tamariki about money that it can feel overwhelming – especially if quaint old piggy banks are out. For older kids, our very own Sorted in Schools initiative weaves financial capability into a number of school subjects, like maths and social studies. For younger kids, we can get started at home – swapping piggy banks for jars.

The four-jar system for pocket money

I had heard before of parents using multiple jars to help kids manage their money, and this method overcomes the disadvantages of piggy banks that I’d read about.

For one, kids can learn to make choices about where their money is going each time they drop a coin in. Then there is the fact that they are clear, so kids can watch savings grow and have a better idea how much they’ve got and the progress they’re making towards their goals.

When we started our three kids (aged 4, 6 and 9) on pocket money, we also gathered up some jars. I had a somewhat ambitious, four-jar system in mind – one each for spending, saving, giving and growing.

While those first three are pretty self-explanatory, I figured that the ‘growing’ jar could be for a bit of an investment or entrepreneurial fund – money set aside to make more money someday. Kids get lots of ideas about small businesses to start, and this jar could help cover the costs of sugar and cups for a lemonade stand, for instance.

Most importantly, I wanted to give them the experience of having one part of their finances always going upwards, always growing over time for their future. 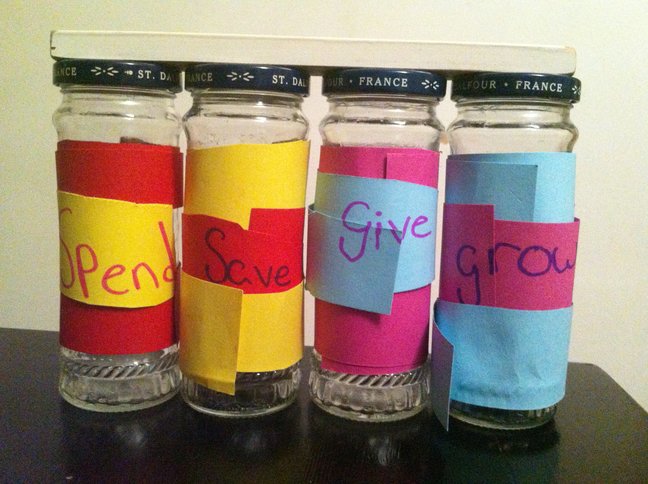 My daughter and I built the prototype seen here (shows you how much jam we go through at home). I simply screwed four lids to a strip of wood I had lying around. She took it upon herself to decorate them, which I went along with, even though it made it a bit harder to see inside. It really made it hers.

‘I like the spending and saving jars, but I’m not sure about the giving and growing ones,’ she told me.

The four-jar bank was a mixed success at first – she only had her pocket money in the first two. I offered to match some of her funds if they were spread to the others. Some incentives may be needed!

The younger boys also got into the four-jar system. Depending on their personalities, they gravitated to one or the other – big brother was more interested in giving and growing, little brother on spending for his collection of Beyblade tops.

What’s been interesting is that both boys insisted that there be a slot in the lids so they do not have to keep unscrewing them open. Turns out those piggy banks got something right after all – kids like dropping coins in.

Eventually, when they were old enough, the kids transitioned into digital versions of these jars in separate accounts they check on their phones. Early on though, it helps to have something tangible to start.

What works for you?

About Sorted in Schools

Our research shows 82% of school leavers wished they had learned more about money at school.

Sorted in Schools responded by becoming the only financial capability programme aligned to the New Zealand Curriculum and Māori Medium Education, also enabling students to gain credits towards their NCEA qualifications.

Want Sorted in Schools at your school? Ask your teacher to sign up.

Why frugality is overrated

Pssst. Your kid’s a whiz with money.