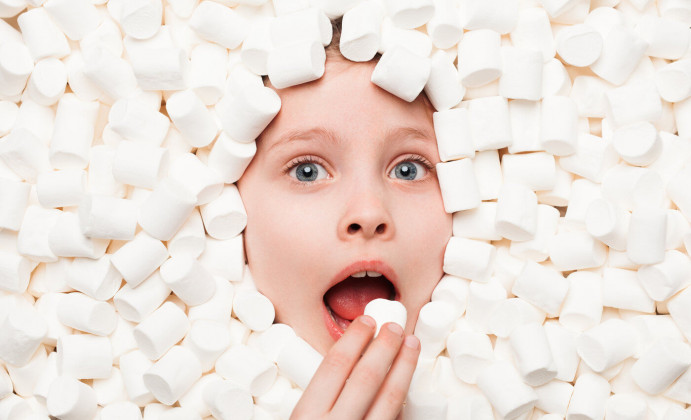 Posted by Tom Hartmann in KiwiSaver Kids and money 2 Comments

It must be the most excruciating 15 minutes ever. To a child, participating in what’s popularly known as the “marshmallow test” (it was also originally done with Oreos) must be like blowing against the wind – trying to take on human nature.

The Kiwi version of this test (with a nod to its originator Walter Mischel) would be to sit a child down and put a chocolate fish on a table in front of them. They’re allowed to have that one straight away, but if they can wait for 15 minutes, they can have three of them instead.

You’d think it wouldn’t be that hard to score the three, and that most would choose to wait.

Kids in the original study did not last much more than a minute before they gobbled the Oreo. It did become easier to wait if the kids distracted themselves by thinking about something fun, or if the treat was not placed in plain sight. Then the average became more like 11 minutes.

The curious thing, though, is that if you shift those 15 minutes of waiting further into the future, it is much easier to make a better decision. If you asked a child right now whether tomorrow they would like one chocolate fish at 2pm or three fish at 2.15pm, they would much more readily choose the three slightly later tomorrow.

Getting kids into KiwiSaver is much like that – it can be about making good choices far into their future. If you wait and leave the decision to opt in or out until the moment they start earning, they might opt out and find lots of other short-term reasons to use that contribution money.

With kids, you can set up KiwiSaver way earlier, without present needs pulling at them. When they eventually start earning and contributing, their account is waiting ready to go.

It needs to be about goals

So there can be many benefits to having kids in KiwiSaver early. They can think about their futures or imagine where they might want to live someday. They can learn about investing, and how money is not just for spending – it’s for growing.

But like all investing, it needs to be driven by your goals for that money and the timeframe you’re investing for. KiwiSaver is typically restricted to retirement savings or a first home, so using it to save for education, for instance, will not work.

So what’s the goal for that money? And how soon will they need it back?

If you do set up the kids with a KiwiSaver account, one thing they’ll need is an IRD number. Here’s how.

The latest on fees for under 18s

Some parents used to write to me, outraged that their children were being charged $50 a year by their fund manager. They had started with $1000 in there and didn’t contribute for five years – so a quarter of their kids’ savings had been wiped out.

The issue with KiwiSaver for kids is the fees. KiwiSaver accounts make sense if there are regular contributions going in – from us, employers, the government, the market returns. Kids typically only get one-off contributions from parents, grandparents and investment returns, so fees can quickly eat away the balances.

There are a handful of KiwiSaver providers who have addressed this:

The short of it is: if you are going to have your kids in KiwiSaver, make sure you pick a fund where their balance won’t be eaten away by fees. And of course it has to match your goals for the investment of that money.

By joining them early, you prevent them facing that short-term dilemma when they start working of whether to sign up, or just keep their contributions for more immediate things.

At least they can't buy Drinks.

Simplicity have removed the annual $30 for under 18 year olds.