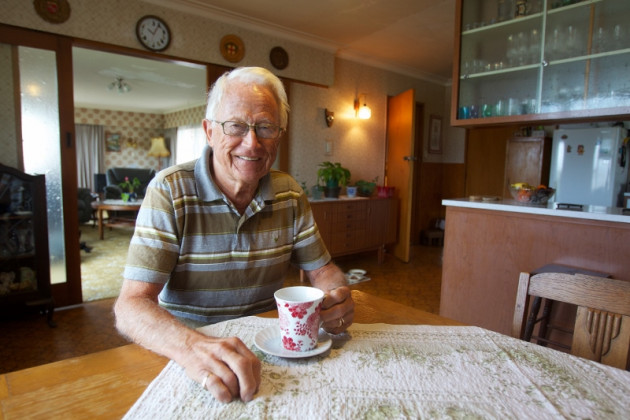 Jens Meder stopped working over 20 years ago and says he’s been loving retirement ever since. He lives in his Point Chevalier home on $370 a week from NZ Super and $551 from other sources.

Before retirement, Jens owned a successful bakery business. The money from the sale of his business and income from three investment properties means that he has more than $900 a week to live on.

On an average week, however, he spends a lot less than this on himself, usually around $250. Jens puts money aside to maintain his properties, as well as to fund his travel, which he enjoys annually, often to see his son who lives in New Caledonia or an occasional trip to Sydney.

Jens says he learned money lessons early in life. He has been careful with the way he spends his money, only borrowing for investments, never for consumable goods.

Having moved to New Zealand in 1949 from Estonia at the age of 20, Jens worked as an apprentice baker and went on to buy the business. He invested extra money in low-risk investments, never betting more than he could afford to lose.

In retirement he has more time to spend with his two children and three grandchildren. His wife passed away seven years ago, and since then he has taken in a boarder – a retired friend.

“I’ve been very lucky. This is a sweet part of my life, and I’m making the most of it,” he says.

Thanks for this. It's useful for me to see how much I might need on top of super. I don't want to keep saving away, worried I don't have "enough" - and this story helps to illustrate the possibility that you might live on less than you had planned. I alway have a tendency to imagine I'll end up needing more! I also like the way it shows diversified and in some cases unplanned income - like getting a boarder when his circumstances changed.