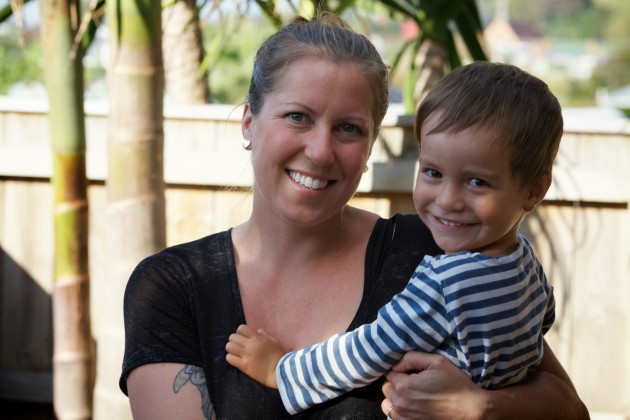 Posted by Katie Ludman in Having a baby Relationships 0 Comments

When Henriette Brettell found she was expecting her first child, her plans were black and white. She’d take maternity leave and then return to work. But virtually the moment she saw her baby Felix, Henriette realised she wanted to stay at home with him instead.

No longer were her former interests in fashion soul-satisfying. ‘The intensity that I felt for my newborn baby and my job of a mother overshadowed my former passions and interests. No job felt as important as being there 24/7 for my child. That really threw a spanner in the works financially.’

The change of plan has meant a huge financial adjustment for Henriette and husband Mo. Suddenly their income dropped by nearly 40% a year.

Henriette and Mo have been together for 13 years and married for three. Before Felix was born they had travelled overseas and developed their respective careers. Having studied as an audio engineer, Mo is a freelance DJ and manages a restaurant during the week. Henriette trained as a costume artist, later moving on to merchandising, styling and boutique retail management in the fashion industry.

Babies and home ownership had always been part of the plan and after returning from working overseas, the couple saved for a few years towards both goals. ‘We were in a good place to have a baby,’ says Henriette. ‘We had been in a stable relationship for 10 years, we had savings, and everything was planned out financially in life.’

Henriette worked until two weeks before her due date and had arranged maternity leave. Although the couple had budgeted for Henriette to take a year off work before returning, her outlook on life was changed irrevocably by the arrival of Felix.

‘I didn’t expect my mothering style to be what it was,’ she says. ‘I thought I would go back to work and pop my children in day care and everything would be merry. I really thought it would be black and white.’

Making the transition from good earner to stay-at-home mum was a difficult hill to climb for Henriette.

Having worked in the costume and fashion industry, Henriette had a wardrobe bursting at the seams with designer clothes. In her new life, such clothing didn’t really get used and has been sold off little by little on Trade Me and through consignment stores.

‘Heels have been replaced by flats, clothing streamlined and accessories minimised. I just don’t have the desire for quantity anymore; nor do we have the space. Minimal, high quality has become my mantra now.’

‘[The transition] was a huge adjustment for me psychologically,’ says Henriette. ‘I found it very difficult not having my own money and not being able to spend the family spending money with a clear conscience.’

The first year was made a little easier thanks to the savings the couple had set aside for the period when Henriette was not working. ‘We plodded along and managed to pay all our bills and the mortgage absolutely fine.’ It was the second year that required more changes.

Despite the drop in income the couple is able to cope by prioritising the bills and mortgage. They are also good at differentiating needs from wants. ‘I have clear perspective between the two,’ says Henriette.

Henriette handles the couple’s day-to-day finances. ‘That’s a personality thing,’ she says. ‘I am the organised, practical money person. I don’t attach emotions to money. It is very numerical to me.’

It is a learned skill. Neither Henriette nor Mo got specific financial education as children. ‘Finances weren’t shared with us as children,’ says Henriette. ‘I left home young, with few money skills. I knew you had to pay rent and bills, but I had no in-depth sophisticated financial skills bestowed on me. Mo was in the same boat and has had to learn as well.’

‘While I’ve always been very socially and environmentally conscious, I am much more financially savvy now for having a child. There comes a point when you have your children that you live in a completely different way to what you did before. For example, we never go out to dinner now. We do still socialise, but we socialise in a completely different way. We might have shared dinners instead of going to a restaurant. It is just as, if not more, fulfilling.’

The new money plan for the family is to hunker down financially until their youngest child is five years old. Henriette will then retrain for a new career – as many mothers do.

The change in the couple’s finances has meant staying longer in their 48-square-metre home unit than planned. The couple accepts the need to move to a bigger property as the family gets larger. In the meantime, Henriette, Mo and Felix love their stylish home in Auckland’s Devonport. ‘We are happy. It is safe and it fulfils our needs,’ says Henriette.